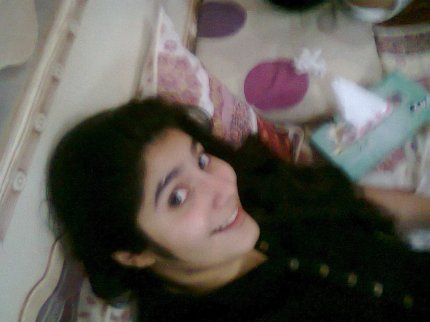 In bed, trying to smile to the camera while my cup of coffee is all empty!!

What happens when all day you have been working like an ass and at the end of the day when you want to have a nap, the sleep doesn’t come by easily?? At times, I am dozing off unnecessarily but right now when I really need to sleep as I have to get up early in the morning cause my baby cousins will be at my place – I just can’t help myself but crave for some caffeine! My system has been programmed to malfunction at extreme times I guess, whenever I am exhausted and exceptionally fatigued I can not rest instead I am more restless and hyper-active at such moments which results in the dark-creepy-swollen eyes! 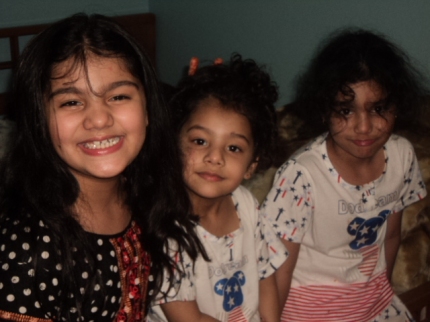 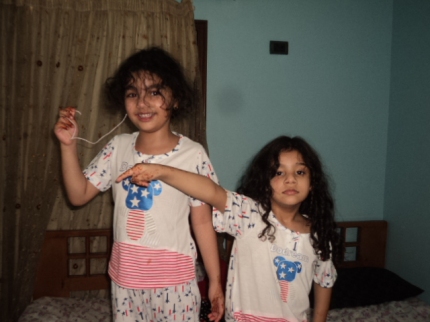 Nabah and Izma jumping on the bed during breakfast and I am sure you can’t hear me requesting them to sit down in the photo!!

The day was busy and tiring today; my mommy and aunt were out for shopping and my aunt had an appointment with a orthopedist as well due to some recent back and leg cramps occurring occasionally since a while ago. My mom and aunt left me with the kids at 10 in the morning when they were sleeping peacefully in their bed. After an hour or so they woke up and I knew my parade had begun. I managed to fry eggs and toast few slices of bread along with boiling milk on the stove while consoling the youngest that her mother is in the washroom(Lying with kids can be dangerous and I discourage that – my experience had taught me enough today). I prepared their breakfast as fast as I could and dashed into the room to find the other two playing some Barbie games on my brand new iPad. Firstly I couldn’t digest how they turned it on when I have never used it in front of them but then I flushed that thought at the back of my head knowing that they were not some normal kids but the super-techno kids of 21st century. I was not worried about my iPad for that time but I was worried about their empty tummies. I fed them with my own hands from the oldest to youngest cause the 7 years old feels that I discriminate on the basis of love with them due to their ages (though it has never been my intention) so I couldn’t do anything but feed the three of them myself. Then I managed to get their attention off the iPad as I had to bathe them. I bathed them, had them brush their teeth and then brushed their long curly hair – goodness; it was another examination brushing their long curly hair and making a tight looking braid once they were dry! 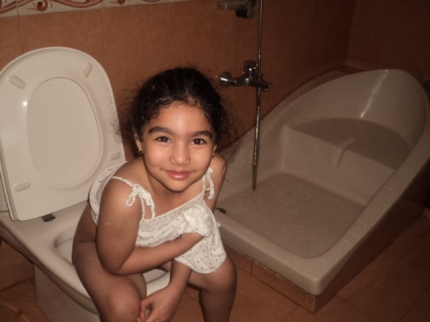 Nabah running to me for going to the bathroom after I have resolved the fight between them for that goddamned remote!!

At 2 in the afternoon my siblings were at home from their school and serving them with the lunch along with the three little kids wasn’t an easy task. I served them with sandwiches and fried some nuggets and crockets which were enjoyed by my siblings as well as my baby cousins. Sideways, I told my siblings to take an afternoon nap so they can get up fresh in the evening and continue with their homework and etc. Fortunately, they obeyed me without any argument (which is a rare case) and I engaged myself with the babies because I had to cook some oat meal porridge for them as per their mother’s instructions. While the oatmeal was preparing, I gave them some books to read but they showed least interest and then reluctantly I had to play the DVD of “The Little Mermaid” for them so that they could sit quietly. As I went in my room to relax myself for a bit and lay down in bed for a while, I heard the youngest (Izma) crying and her voice pierced through my ears and I got up running all the way to the hall so that I could see for my eyes what had happened that have had her screaming along with sobbing loudly. When I reached the hall, I saw them pulling each other’s hair and smashing each other with whatever comes their way to hand like a weapon. I got in between and was severely thrashed with hair pulling and scratches of their trimmed nails and what not but ultimately I got them over the fight which had accidentally started over who would keep the remote in their hand and just then the porridge was ready too as I could smell the aroma so well. I learnt a lesson on my way: Never ever think of “RESTING” leaving the kids alone; they would screw you even before you start regretting. 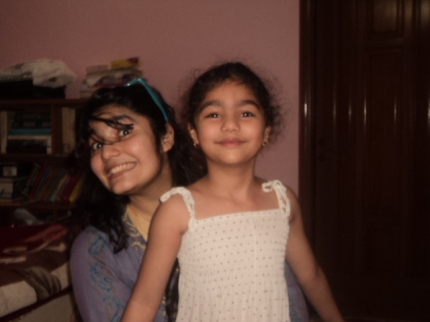 After giving me hell of the 15 minutes of my life; she still smiled!! 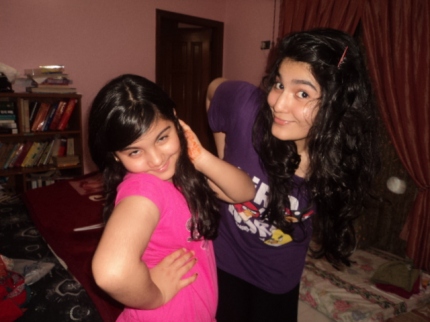 Nabah desired to capture a shot cause she wanted to use my camera!!
Look at my posy baby(Soha) – giving me a hard laugh as I go through the pictures!

Anyway, the oldest (Soha) ate the porridge without any chaos. The youngest(Izma) did make some noise but when I engaged her attention with some teddy bears and dolls around me, she was convinced and ate her meal without any mess but the one in between these two sisters; the one older than Izma but younger than Soha made me experience hell within the 15 minutes while I forced spoonful of porridge in her mouth which would come streaming out and I would make her eat the same thing again (I really felt like puking but I had to do it) because if I would have thought of sparing her of that oatmeal, her mommy would have never spared me for life punishing me for keeping her baby hungry! After all when she was done with her porridge, I felt like a winner – so proud of myself and smiling to each one of them for their cooperation and teaching me the worth of the mothers across the world. 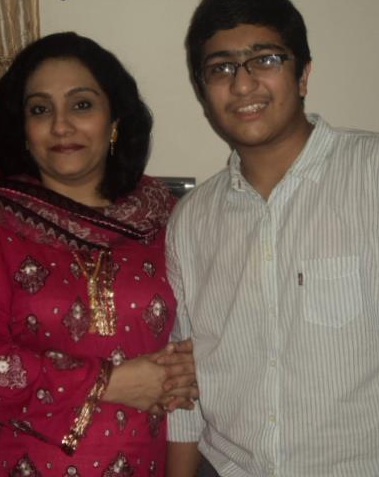 My pretty mommy with Umair (my brother)!

This one day baby sitting taught me a lot. When my mom came back, I hugged her like a 4-year-old baby would tug into her mom seeing her after a long time. The three babies were even happier to see their mom. I realized how mothers work like a robot machines, looking after kids, serving their husbands, looking after the household and what not. Their day starts with the sun (or even before that) and their day would end late after everyone is snoring and fast asleep. I am tear-eyed thinking of what my mommy has gone through for me and my family and that whatever I do, it can never repay for the sleepless nights she had stayed up when I was a baby and my days were nights and nights a lively morning, I can never pay off for the time she has spent in my upbringing teaching me the difference between good and bad, I can never compensate for her love and care she has awarded me with throughout and I wonder if I would ever be able to pay her off for being my backbone through the thick and thin which has given me the confidence to stand upright with dignity in the shoes which fit me now. This is not the story of my *MOTHER* specifically but all the mothers across the globe. They say, Heaven is under the feet of mothers and I can not agree more because Almighty created mothers as His representative on the phase of this planet. That’s why He had poured all the love and care in the mother that He would have liked to give to His creations in the embodiment of a mother. One day baby-sitting taught me much, I have been babysitting my baby cousins for a while now since they are here from Dubai but an entire day with the babies where I have no one to depend on was an outstanding lesson. While I sit in my bed sipping caffeine, I mumble “I LOVE YOU, MAMA” and you my friends out there have to give your mothers a call – a phone call probably and those who unfortunately can’t give a phone call, give her an honor for the memory call! I can not help but salute all the mothers out there who have the stamina to overlook their baby’s mistakes because it is only them who possesses heart as vast and immense as the sea – the true beauties and saviors of the world!